Laser is actually an acronym rather than a word, which stands for Light Amplification through Stimulated Emission ofRadiation. Laser differs from most other light sources. Sunlight or the electric light we use to light homes and buildings contains light of various wavelengths that diverge in many different directions. Laser, on the other hand, is light that concentrated into a beam with a single wavelength that radiates in a single direction. Super luminous diodes (SLD) and light emitting diodes (LED) can also be used for light therapy as they can emit non-divergent light in a narrow range of wavelengths or frequencies, however, because LED light is low power light that is somewhat divergent, it will penetrate into human tissue a few millimeters. SLD light is medium power light that is somewhat focused, and will penetrate human tissue to about 1 cm. With regard to laser, laser devices are classified by power output which is measured in milliWatts (mW) and there are 5 classes of laser: 1, 2, 3A, 3B, and 4. 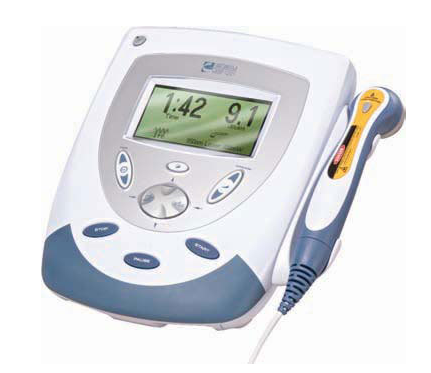 Laser and Light Therapy is being used more extensively in healthcare applications.

Class 1 lasers have very lower power output, less than .5 mW, and are used in laser printers, and CD or DVD players.

Class 2 lasers also have a low output, less than 1mW, and are used in laser pointers.

Class 3A lasers put out less than 5mW and are used in laser pointers and some therapeutic laser devices.

Class 3B lasers have a higher power output of less than 500mW and are used in therapeutic laser devices which will penetrate human tissue up to 5cm.

Class 4 lasers have a power output of greater than 500mW and are used as surgical lasers.

Power, as has been mentioned previously, is measured in milliWatts (mW), which indicates the amount of light energy put out per unit of time.

Energy is the total amount of light energy delivered during a laser or light therapy treatment and is measured in Joules. Joules are power multiplied by time. 1 Joule is equivalent to 1 Watt multiplied by 1 second.

As a result, a higher output laser or light applicator will deliver the same amount or energy over a shorter amount of time than a lower output applicator so treatment times can be affected by power output. In other words, it may be possible to get some therapeutic benefit from a CD player or laser pointer, but the time required to deliver a therapeutic dose to human tissue at such low power makes treatment with these classes of laser impractical.

Understanding some of the basic concepts surrounding laser and light therapy should help medical professionals considering adding laser or light therapy to their practice make a more informed decision.