Chronic pain is the most common cause of long-term disability in the United States. As a result most conditions that result in a visit to physical therapy involve a degree of inflammation and pain. These symptoms typically result in functional limitations, decreased strength and impaired mobility. Physical therapists create treatment plans with efficiency and maximum benefits in mind using a combination of manual therapy, activity-based procedures, patient education and physical modalities. When considering using a modality, many factors are considered: ease of use, efficiency of time, whether it’s non-invasive, and the speed in which it can benefit. Low-Level Laser Therapy (LLLT) is one of the most popular treatment modalities in physical therapy. Physical therapists use laser light therapy to great 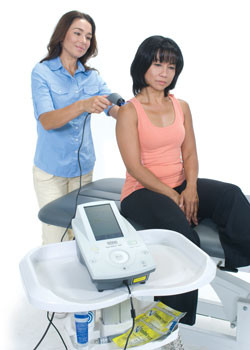 Laser Light therapy uses very short wavelengths of light (600-1000 nm) to penetrate human tissue which facilitates the healing of tissue, reduces pain and swelling. Particles called photons assemble in waveforms to make light. The light transmits through the skin's layers (the dermis, epidermis and the subcutaneous tissue or tissue fat under the skin) at all wavelengths within the visible range. However, light waves in the near infrared ranges penetrate the deepest of all light waves in the visible spectrum. When low level laser light waves penetrate deeply into the skin, they optimize the body’s immune responses in the blood. This creates both anti-inflammatory and immunosuppressive effects. Research has found that light transmitted to the blood through light therapy has positive effective through-out the whole body because it supplies vital oxygen and energy to every cell.

The type of light utilized in Laser Light Therapy is most commonly red or near infrared light. These forms of light are found on the electromagnetic spectrum just above visible light. Numerous studies have found that the photons, especially those found in the red or near infrared spectrum, have healing properties at the cellular level, which means the cells are able to absorb the photons. The cell then uses these photons to make additional adenosine triphosphate (ATP), which creates the body’s energy. Being able to create this additional energy helps accelerate the body’s natural healing processes.

Additionally, Laser Light Therapy is a popular treatment modality, aside from its therapeutic benefits, is treatments usually last 5 minutes or less are non-invasive and are pain-free. And while light therapy treatments are usually performed two to three times a week, most people have noticed improvements with their first or second treatment, making it fast acting too.

LLLT has been shown to hasten the inflammatory process through mitochondrial chromophore stimulation. This is important because this stimulation increases respiratory chain activity, which in turn enhances ATP synthesis, cellular repair and reproduction.

With these broad-ranging benefits, LLLT is appropriate for a lot of treatment plans. Let’s discuss where LLLT may be a productive tool in physical therapy treatment.

The diversity of pain conditions in patients requires a diversity of research and treatment approaches. The costs of unrelieved pain can result in longer hospital stays, increased rates of re-hospitalization, increased outpatient visits, and decreased ability to function fully which leads to loss of income and insurance coverage. According to a recent Institute of Medicine report: “Relieving Pain in America: A Blueprint for Transforming Prevention, Care, Education, and Research”, pain is a significant public health problem that costs society at least $560-$635 billion annually, an amount equal to about $2,000.00 for everyone living in the U.S. This includes the total incremental cost of health care due to pain from ranging between $261 to $300 billion and $297-$336 billion due to lost productivity (based on days of work missed, hours of work lost). These costs don’t even take into account the psychological cost of living with chronic pain.

In physical therapy, treatment regimens for pain are a combination of hands-on therapy, therapeutic exercise and treatment modalities. As we’ve discussed, studies have shown time and again that Low Level Laser Therapy is an effective partner in physical therapy treatment especially when LLLT was combined with ultrasound therapy. LLLT is effective not only in pain reduction, but is also non-invasive, cost and time-efficient. The benefits of LLLT over a broad-range of diagnoses make it an important tool in any physical therapy practice.