Having worked with physical and occupational therapists in outpatient, acute, and long-term care settings for nearly two decades in one capacity or another I have difficulty counting the number of times I have been in a therapy clinic or facility that owns an electrotherapy machine that in some way is less than optimal and frequently creates nearly as many problems as it solves. The following will outline just a few observations I have made that may be helpful when the purchase of a new electrotherapy device is being considered. 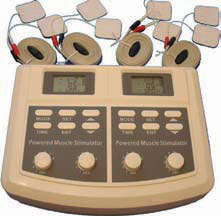 Don’t overspend when you purchase an electrotherapy machine. Consider your use cases and make a good decision.

One minor consideration before more problematic issues are discussed: For the most part, the therapist or staff has done their due diligence with regard to which waveform or waveforms are most appropriate for their patient population and they have selected a device capable of providing the agreed upon waveform or waveforms the staff is familiar and comfortable with. However, more often than not, a clinic or facility will only use one or two waveforms with any frequency, but due to the tendency among device manufacturers to distinguish themselves from their competitors by providing as many waveforms as possible in a single device, the clinic or facility has essentially paid for waveforms they may never use. So long as the physician, therapist, or other staff prescribe and use the waveforms they are familiar and comfortable with correctly, having additional waveforms available as the practice or patient population changes or grows, or if additional education or understanding is obtained, may actually be of benefit in the long run, but far too frequently, electrotherapy devices remain underutilized.

Where I have observed the greatest frustration with electrotherapy devices centers around the number of channels available for use at any one time and whether or not the device includes ultrasound in combination with electrical stimulation and daily clinic operations.

When referring to channels on electrotherapy devices, each channel will accommodate two electrodes. Therefore, when using a two-channel device, a patient could receive an Interferential treatment to their low back using four electrodes set up in the traditional criss-cross pattern with one channel crossing over the second channel. Or one patient might receive bilateral Russian current to their quadriceps with one channel set up on each leg, for example.

The issue with multiple channels and/or ultrasound combination units that results in eventual problems arises when patient privacy and/or the layout of the clinic prevents multiple patients being treated by a single device simultaneously. Frequently, a facility will purchase a four-channel (eight electrode) electrotherapy machine that also includes ultrasound with the idea that they could treat as many as five patients simultaneously: one patient per channel for a total of four patients receiving electrical stimulation and a fifth patient receiving an ultrasound treatment when in reality, patient privacy issues or the layout of the treatment areas in a clinic prevent simultaneous treatment in such close proximity and a device that was intended to increase clinic efficiency and was obtained at considerable expense for that purpose, can only be used to treat one or perhaps two patients at a time at the most. Ultimately, the facility has to purchase a separate ultrasound machine and perhaps another electrotherapy device to be able to accommodate the number of patients being treated at any given time. Rather than buying a single four-channel device with ultrasound included, it may prove wise to buy two separate, less expensive, two-channel electrotherapy devices and a stand-alone ultrasound machine in an effort to keep a clinic or facility operating effectively and efficiently.