In clinical practice, we need reliable measures of muscle strength to determine mobility and self-care ability within certain patient populations. For example, when you’re treating someone with a spinal cord injury (SCI) they may have strength deficits that can limit their functional ability to perform activities of daily living. In this case, muscle-strength testing is used to document recovery or loss of motor function early in SCI, as well as measure improvements in strength in chronic SCI. These measures are also used for research purposes to determine the effectiveness of clinical trials. 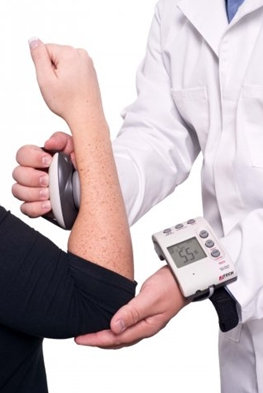 Let’s look at some examples of when muscle testing would be used in the case of a patient with chronic SCI. For example, upper-limb muscles must be strong enough to support the body for pressure relief and transfers. Wrist muscle strength has been related to the motor component of the Functional Independence Measure (FIM) and self-care scores, and therefore, wrist strength is important for function in day-to-day activities.

There are several methods available for muscle testing; including manual muscle testing and dynamometry. We’ll look at handheld dynamometers specifically to discuss the reliability of this device when used in clinical practice.

The use of Handheld Dynamometers in Clinical Practice

When examining muscle strength using handheld dynamometers, we must consider the ability of our patients to hold the standard position for testing and modify accordingly. Consider the length-tension relationship of the muscle; this relationship is between the maximum tensions in a muscle versus the length of the muscle. Ideally, the muscle strength should be tested in its optimal length-tension position. For example, to measure the strength of the biceps, we should position the elbow at approximately 90°, which would put the muscle at its optimal length and generate the greatest tension. However, since the biceps is a two-joint muscle, finding the correct position of the shoulder is important as well. Persons with SCI may have difficulty assuming certain positions and therefore testing their muscles in the optimal length-tension position may be difficult. The greatest challenge for standardization of testing position is gravity. When a gravity-eliminated position is needed for testing, a person with SCI may be unable to assume such a position while still maintaining the optimal length and tension in the muscle being tested. For example, when shoulder-abduction strength is being tested in the supine gravity-eliminated position, the person needs to maintain the shoulder in neutral rotation but then may not have sufficient shoulder-rotation strength for the shoulder abduction testing. In this case, modifications need to be made and noted for limb stabilization.

In deciding whether to use the break or make test approaches, we must understand the reliability of each test. Previous studies are not in agreement; break tests were found to be more reliable than make tests by 10 to 70 percent, which is a huge margin. R.W. Bohannon whose study was published in the Physical Therapy Journal compared make and break tests of the paretic and nonparetic limbs of patients with stroke and found that the break tests resulted in significantly higher strength measurements, particularly for the paretic limb. The author concluded that although make and break test measurements were reliable (ICCs were 0.98 and 0.97 for the make and break tests, respectively), the forces produced within and between the paretic and nonparetic limbs were different. Bohannon also concluded that the two tests should not be used interchangeably and recommended the break test when the influence of excess muscle tone is to be reduced. Others have found slightly greater differences in the reliability of the break test and attribute it to the additional skill required by the examiner. However, Burns et al. published in the American Journal of Physician Medical Rehabilitation compared make and break tests of the elbow flexors of persons with tetraplegia that were performed by two inexperienced examiners. Measures indicated that the examiners performed the tests in a similar manner, and the minor differences in technique were not associated with the differences in strength measured. The authors found excellent reliability for the HHD used in the tests and concluded that no clear reason for choosing one method over the other existed. They stated the variation between earlier studies may be attributed to differences in the strength of the muscles being tested.

When choosing a handheld dynamometer, there are some features to look for:

Muscle testing is useful not only when a patient already has an injury or limitation, but also can be used as a way to identify risk factors for future injury. In a clinical assessment of the reliability of handheld dynamometers in measuring hip strength published in the Scandinavian Journal of Medicine found that the device was accurate in its strength measurements with little variation. It also found the handheld dynamometer can be an accurate screening tool for the detection of hip muscle weakness in healthy individuals, which has been shown to be one of the risk factors for groin injuries.

These findings solidify the need to have handheld dynamometers available as a muscle strength testing tool in any clinical practice. The applications of having accurate strength measurements are broad, effecting populations working toward more independence and ability in self-care to healthy populations looking to avoid future injury. Handheld Dynamometers provide accurate testing results across these broad populations and provide the information necessary to help these patients achieve their goals.