Pain is a powerful motivator including one of the primary reasons people seek medical attention. Pain in general can be associated with reduction in mobility and engagement in activities of daily living (ADL), both of which can have a deleterious effect on quality of life. Further, chronic pain and especially high-impact chronic pain has been associated with dependence on opioids, anxiety and depression, and a reduction in perceived quality of life.

Transcutaneous electrical nerve stimulation (TENS) is a battery-operated device that is used to treat pain associated with:

The mechanism whereby TENS treatment provides pain relief is considered to be two-fold. The first being by reducing the pain signals that enter the spinal cord and thus transmitted to the brain. The other being a stimulatory effect on the pituitary gland and parts of the central nervous system causing the release of endorphins.

#1. Reducing Pain Signals: The mechanism whereby TENS reduces pain signals from entering the spinal cord is known as the Gate Control Theory of Pain Management. In general, Type C Sensory Neurons are sensitive to pain stimuli and upon activation transmit the pain impulse into the spinal cord via the dorsal (sensory) root, which then synapses in the grey matter before crossing over to the other side of the spinal cord. Here it enters the ascending Spinothalamic Tract and is carried up the spinal cord to the thalamus (a type of relay station) where it is routed to the Primary Sensory Cortex for integration and interpretation – as pain.

Type A Sensory Neurons are activated with non-pain stimuli, such as touch, pressure, proprioception, and vibration. When activated they too send the impulse into the spinal cord via the same dorsal (sensory) root. This impulse is then sent up through the Dorsal Column Medial Lemniscal Tract ultimately arriving at the Primary Sensory Cortex for integration and interpretation – as vibration, touch, stretch, pressure, touch, etc. 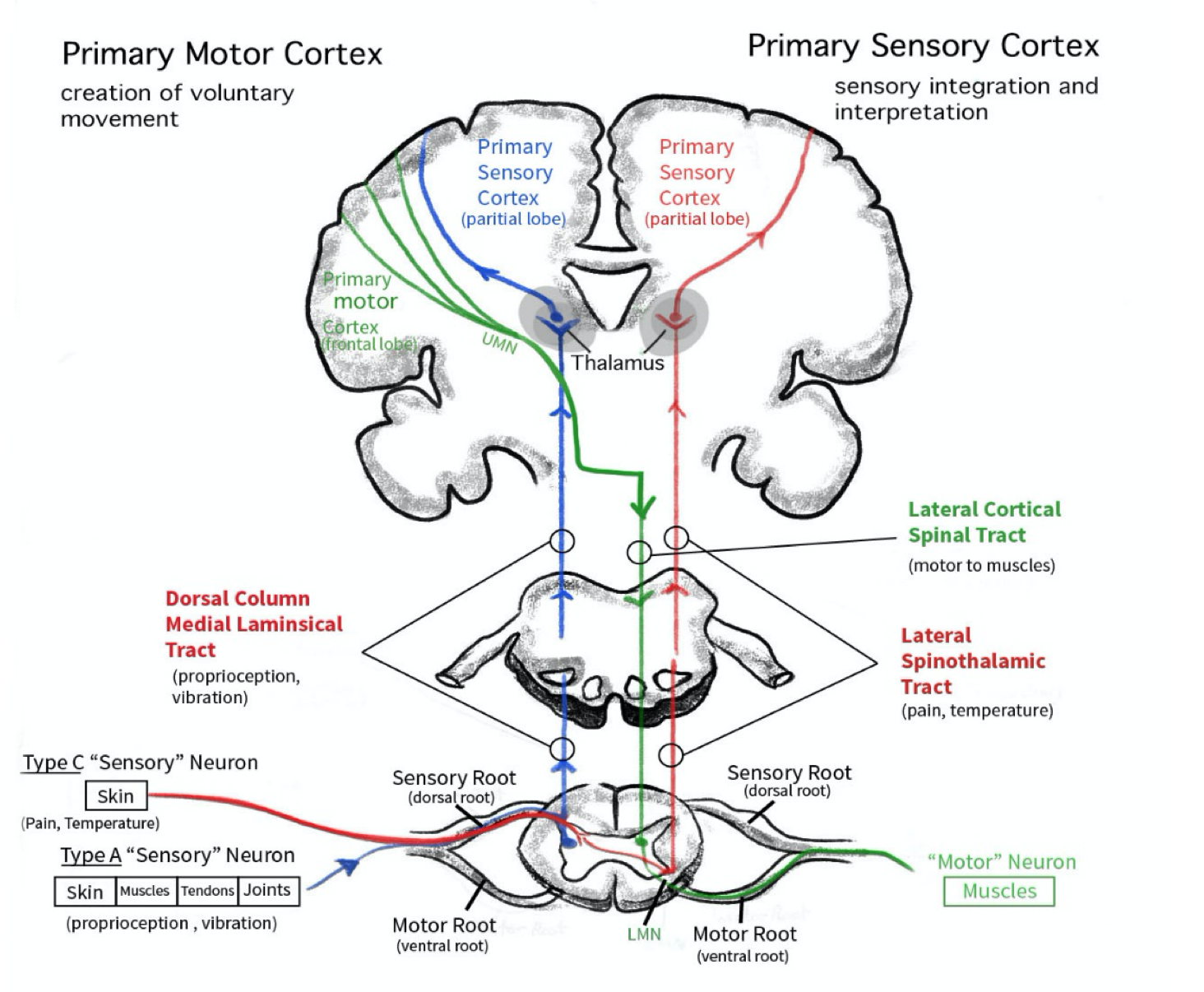 TENS and the Gate Control Theory of Pain Management

A TENS unit sends high frequency electrical current through electrodes into the skin creating a vibration sensation which activates the Type A Sensory Neurons. The high frequency stimulus in essence interferes with the signals from the pain receptors, thereby inhibiting pain. Sometimes it is referred to as creating a “bottle-neck” at the entrance to the spinal cord. In reality, the Type A neurons activate inhibitory neurons, which reduce the transmission of pain signals (closes the gate) coming in through Type C sensory fibers, and the person experiences less pain. This mechanism is similar to what happens when we say hurt our hand and we “rub” vigorously (vibration) to reduce the pain we are experiencing – and it works.

#2. Release of Endorphins: The high-frequency electrical current delivered via a TENS unit has also been shown to stimulate the pituitary gland and certain parts of the central nervous system to release endorphins. Endorphins interact with the opiate receptors in the brain to reduce our perception of pain. They act similarly to drugs such as morphine and codeine. They have also been shown to elicit a feeling of being or a boost to the pleasure a person experiences.