The Purdue Pegboard Manual test was invented in 1948 by Joseph Tiffin, an Industrial Psychologist at Purdue University. The test was developed to determine the capability of potential employees to perform industrial tasks. Since its invention, use of the Purdue Pegboard Dexterity Test has extended to applications such as testing for brain damage, diagnosing learning disabilities, assessing vocational rehabilitation needs, and testing people with dyslexia. The most common use of the test is to evaluate people applying for such jobs as production and assembly, maintenance, and sewing machine operation. 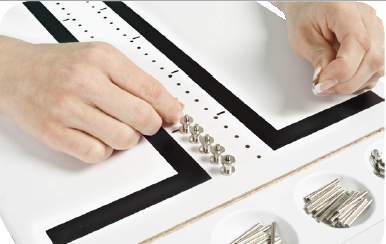 
What Does the Test Measure?

The Purdue Pegboard Test measures two elements of dexterity. It can be used to test the cursory movements of the arms, hands, and fingers. It is also used to test more precise fingertip dexterity movements involved in performing assembly tasks. The testing procedure involves having a test administrator give instructions to the subject being tested, then timing how long it takes for the tester to complete various tasks. Although there is substantial adaptability in performing tests using the Purdue Pegboard, there are standard testing procedures that are most common.


How is the Test Administered?

The instructions that come with a Purdue test indicate to the person being tested, “This is a test to see how quickly and accurately you can work with your hands”. Normally the person being assessed sits at a table and follows instructions from a test administrator while being timed. The administrator typically gives instructions regarding how to perform series of tests that analyze the subject’s competency with his right hand, his left hands, and his ability to use both hands together to pick up and place objects from the test setup (or “battery”). In addition to the picking and placing tests, an assembly test is also given to evaluate more comprehensively the subject’s coordination.

Testing of a person’s ability to pick up and place objects is done by timing (usually for 30 seconds for each hand) how many pins he can move from a cup and place sequentially into pin holes located in the pegboard. The assembly test is performed using a combination of pins, washers, and collars. The test subject is expected to perform alternating functions with his hands to create an assembly “consisting of a pin, a washer, a collar, and a washer.”

After each test in the sequence has been completed, the test administrator tallies a score for the test, which is done by simply counting the number of correctly completed placements or assemblies.

Interpreting the Results
While the actual testing procedure and scoring normally follows the pattern described above, variations to the testing procedure can be created based upon assessment needs. Also, the interpretations of the score can be adapted to the purpose of the test. For instance, one administration of a test could set a level of expectation for performance when qualifying job applicants for a particular job function. In a different circumstance, the pegboard test could be used for setting the criteria that would be applied for rehabilitating someone who has an injury such as Carpal Tunnel Syndrome or arthritis.