Low intensity ultrasound is used for fetal monitoring during pregnancy.

By understanding the primary difference between the use of ultrasound for imaging, or ultrasonography, and healing damaged tissues, a person can gain a greater appreciation of the versatility of ultrasound in medicine. 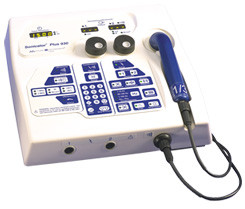 In very broad terms, the use of ultrasound for healing damaged tissues can be divided into two categories: non-thermal responses and thermal responses. In other words, is the target tissue to be heated by the sound waves due to frequency and intensity or not? Healing can occur when the target tissues are not heated or as a result of heating depending on the goals of the care provider.

Some of the effects of ultrasound during treatments without heating tissue include: increased macrophage activity at the cellular level, increased intracellular calcium synthesis, increased skin and cell membrane permeability, and increased fibroblastic protein synthesis. All of these responses indicate an increase in cellular activity. In other words, when ultrasonic sound waves are applied to varying tissues appropriately, the cells in the target tissue are excited into working more quickly to break down and dispose of damaged cells or cellular material and rebuild or replace damaged cells with new and healthy cellular material.

Some of the effects of ultrasound during treatments while tissues are being heated include: increased extensibility in collagen-rich structures such as tendons and ligaments, decreased joint stiffness, and decreased muscle spasm and pain. It is common knowledge that ‘warm’ tissues such as muscles, tendons, and ligaments are more flexible and less likely to ‘pull’ or tear, hence the concept of ‘warming-up’ before vigorous exercise. For patients whose muscles, tendons, and ligaments are contracted, stiff, or sore due to injury or some other condition, having those tissues heated to the point they can be stretched to their full range and joints can be used without stiffness or soreness is highly therapeutic and beneficial.

Physical and occupational therapists, chiropractors, and other health care practitioners have been using ultrasound effectively for decades to provide tissue healing and relief from pain right alongside the ultrasound technicians and radiologists who have been utilizing ultrasound to monitor fetal development.